Debating the future of development cooperation 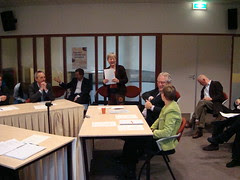 a speaker to be allowed in.

The majority said that the terms poverty and development are intertwined. Using these terms demands clarification. Poverty is subjective and its sphere needs to be broadened. It has too often been seen as merely improving the economic position of people e.g. with the '1 $ a day' criteria. It should however also address socio-political issues, such as empowerment, and moral issues, such as solidarity in a specific context.

In terms of development, several speakers emphasised that we should step away from linear thinking; that we have set our aims too high. We need to narrow down our ambitions and provide opportunities to marginalised people. We should also think more in terms of cooperation, rather than poverty reduction. Reinier van Hoffen states that: "The word cooperation is hardly emphasised. It should be a central element. We should learn from each other, share knowledge, be concerned and interconnected with each other".

We cannot "save the world" or "provide monetary wealth to all people". But we can make small and valuable contributions. Annemiek van de Kerk stressed that we should focus especially on marginalised people that governments and bilateral organisations fail to reach. She quoted Ghandi: "the world has enough for everyone’s need, but not for everyone’s greed".

The various participants agreed that we, as the ICCO Alliance, need to clarify our role in cooperation with different partners on our position in development and in poverty reduction. We need to clarify the expectations that others, such as the Dutch government, can have of the ICCO Alliance. The large budget given to the Alliance increases our accountability requirements, but it shouldn't change our identity and core activities. We need to listen to those needs we want to meet. Dieneke de Groot states that: 'Development is interrelated with power. The fundamental is empowerment of people'.

Harry Derksen emphasised that our role needs to be aligned with, but separate from that of the Dutch government. We should implement those programs that people in need ask us to implement. He stated: "We need to listen to peoples' wishes, instead of implementing what we wish to implement. Our mindset needs to be broadened, beyond north south thinking, towards thinking in global terms". Jack van Ham furthermore stressed that: "We should dare to finance countervailing powers, it is our strength. We should expand and politicise this".

Sticking to our role in a world of rapidly growing interconnectedness is crucial. Our watchdog position is our added value. Willemijn Lammers supplemented this by stating "We have a speciality: processes of society building. When our role is pure, we have no other interest, but poverty reduction".

Gemma Crijns facilitated the debate and reflects on the discussion

Click To Play
By Stephanie Zwier (Euforic) and Jonathan Huseman (ICCO)
Posted by compartuser at 17:45