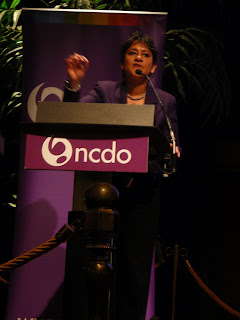 NCDO's call for a debate on aid effectiveness mobilised at least two hundred people to come to Amsterdam on February 4. Talking about effectivenesssoon triggered a gentle, searching whisper for improved cooperation. Joan Ferrier, NCDO's vice chair, opened the debate. Towards the end of the debate, friction and tension filled the air. More questions were raised than answered. How should we better cooperate? With what objective? Effectiveness? How to reach the poor? The debate will go on, assured Jos van Gennip, NCDO’s chair.

Herman Specker from the Dutch Ministry of Foreign Affairs introduced the meaning of effectiveness. He spoke of different levels of result measurement and emphasised that: “we should steer programs on results, not on intentions”.

Mathieu Barends, showed a video of his flower company in Ethiopia. “I advise anyone to have a look abroad; my eyes were opened, opportunities are abundant”. Despite some start up difficulties, such as Ethiopian bureaucracy and rough climate, he runs a thriving business.

Frits van der Wal from the Ministry of Foreign Affairs talked about the role played by several organisations in Ethiopia. He described the ‘productive safety net program’ that builds on the assets that are locally present, to improve increase people’s security.

After the presentations, a debate!

Lau Schulpen, argued against this position rejecting the narrow economic definition of poverty. A supporter of the statement showed how mobile phone networks have contributed massively to poverty reduction. Two speakers arguing against the stance agreed on the facilitating role the government should play in regulating the boundaries within which business life should manoeuvre. Han Koch called for reflection by the government and business life and re-emphasised an expressed call from the audience to cooperate more closely. Bob van der Bijl joined the last two speakers by stating that the government should create conditions by helping governments in setting rules and regulations.

A second round of presentatioons:

Frans van Slagmaat, chair of Bike 4 All, the winner of an award for small private initiative demonstrated his project. A short movie demonstrated his project and an Ethiopian biker expressed the sense for cooperation ‘hand to hand, heart to heart and mind to mind’. The project was successful because of the solid bikers cooperation: a bottom-up/top-down strategy, the bridging function of DIR (a Dutch migrant organisation) and help from Intercultural Emotional Intelligence. He emphasised the importance for a group to be culturally sensitive, creative, and determined. This will result in fruitful cooperation.

Susan Muis, working for ICCO on Democracy and Peacebuilding in the Sudan showed a video from her program. She emphasised that in measuring effectiveness the invisible should not be overlooked. It is easy and common to measure the number of schools built. What should be included when talking about effectiveness are invisible tensions and conflicts. Cooperation should involve NGO’s and the government.

The second discussion statement posed was: “Aid effectiveness benefits from mergers between NGO’s and private initiatives”.

Annie Manders, asked to oppose this statement, argued that “The interest of the privately owned initiative will be insufficiently defended when merging with NGO’s." She expressed a sense of dissatisfaction that the real debate that should be held was avoided by a call for cooperation. Everybody embraces this objective, since we have shared motives. But, how can we reach more aid effectiveness. And if through improved cooperation, how should it improve? The fight, the battle against poverty, does it exclude setbacks? Why did we only listen to success stories today? We might better listen to failed projects and learn from them.

Jos van Gennip closed the debate, concluding that we should change our tone in relation to ‘the South’, not seeing it as part of the problem, but as part of the solution. The debate should be continued.

Click To Play
By Stephanie Zwier
Posted by compartuser at 10:27

Funny bunch that NCDO, inviting the government to 'teach' about efficiency. Like asking the worst student in class to copy his homework.
Everybody knows, and I mean everybody, not just the professional organisation consultants such as myself, not just the people who worked for the state or still work there, no everybody knows the government as the LEAST EFFICIENT institution of them all. Which makes them the LEAST QUALIFIED to teach on this subject.
Now that is still funny. What is LESS FUNNY is that this institution also imposes its inefficient models on every other institution it subsidises. Who knows not what this means in daily practicte? It means that it changes well-willing people working to make a better world into paper producers. Fillers of forms. Calculators of risks. Imposing control in the name of the ever control hungry government.

Of course the reality is that inviting government to talk wasn't a joke. It was an opportunity for all subsidy dependents to see what words to use in their next application. 'Co-operation' will be the word preached on all the application from now on. It's a circus where everybody plays its role and everybody knows it from eachother. But change is at hand, an initiative like 1procentclub really takes a different road, I hope soon we will all be independent off the archaic models of government!