By the Dalits for the Dalits; CARDS theater group performs

The 'CARDS International' theatre group from India performed in the chapel of the ICCO Alliance office in Utrecht today. This youth group is visiting the Netherlands for two weeks from June 3 until June 16. Their objective is to raise awareness on the situation of Dalits in India. Dalits fall outside the Hindu cast system and are considered to be lower than the poorest class.

Today's performance showed a touching mixture of theatre and dance. The drums that represented the hearts of the Dalits and its hypnotizing beat could be heard throughout the ICCO building. The chapels, with its colourful windows provided a suitable setting for this performance. Through their dance they showed how government provided fruits were available. The poor Dalits were however not able to access these fruits, which were bought by landlords and more privileged persons. 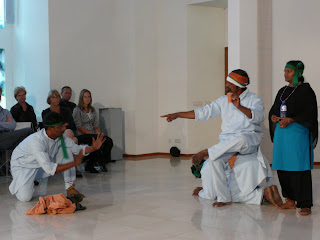 The performance showed the changes brought about by the work of CARDS. It showed how the financial situation improved. The Dalits no longer had to beg and they were no longer shouted at.
The water situation also improved, since the water source was solidified. Their status in general had improved and especially that of Dalit women. A woman no longer had to massage a men's leg, nor fetch them a drink when asked in a brutal tone. The Dalit ladies could simply pass men by with an umbrella and a smile on her face. 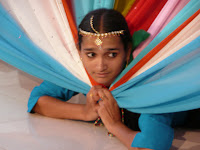 CARDS is a youth organisation for development of rural communities in Andra Pradesh. CARDS has been working over 25 years for rights of Dalits. The ICCO Alliance has supported a number of their projects since 1968, read more. 60-70% of Dalits are illiterate, that is partially why this theater group is raising awareness on their situation. The performance was made 'by the Dalits for the Dalits'.

For more pictures of the performance, follow this link.

By Stephanie Zwier
Posted by compartuser at 16:05