Using wiki for linking and learning in Indonesia

During the meeting ‘Working with wiki’s in development organisations’ I was inspired to also use a wiki in an upcoming conference I was co-organising in Indonesia. From 23 until 28 of June this conference was held and I think it was a success, also the wiki part of it, although the wiki still needs to prove itself…

I proposed the wiki to the organising committee three months b 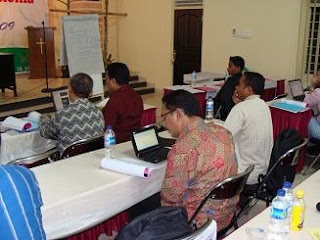 efore the conference as an instrument for the participants to keep in touch and exchange information after the conference. Everybody was immediately very enthusiastic, but were also a bit hesitant about the computer capabilities and internet facilities of all participants. In the end we decided to introduce the wiki to participants interested and capable of working with computers and internet; so voluntary and not an official part of the program.

We found an IT specialist from a partner organisation that was willing to guide and prepare the wiki process. This proved to be essential. He translated the wiki tutorial into Indonesian and trained a group of young people that would write the reports during the conference how to use the wiki so they could upload their reports on the wiki. He is now also the one people can ask questions to if they have a problem with the wiki.

By sending all participants the tutorial we tried to get people to use the wiki already before the start of the conference, but this was not a big success. Without training or introduction the step to start working on the wiki is too big. During the conference this was fully compensated though. Many participants liked the idea of a wiki, especially for its possibility to keep in touch with other partner organisations and to share information with each other. Almost all participants joined the (voluntary) wiki workshop, signed in and read the information. Some also placed comments or made their own page. 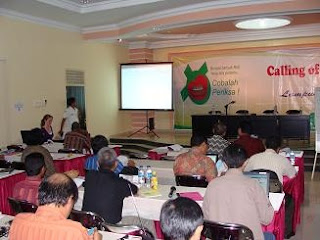 ough with placing information on the wiki. One of the reasons for this is that people are not sure who else are reading all the information they put up there. We discussed closing the front page, so only people registered can see and join in on the wiki, but this only partly solves the problem and it also makes the information less accessible for people interested.

So introducing the wiki was a success, but whether it is useful for the future will depend on whether people will keep on adding information to it. By the way, if you want to check out our wiki, go to: diakonia.pbworks.com

By Miriam Nagtegaal
Posted by compartuser at 10:39