On Tuesday 20 and Wednesday 21 July 2010 Maarten, Pete, Danny and myself will meet at the ICCO Global Office in Utrecht for an interim review of the ComPart project, to see how we are doing against the targets and objectives set at the beginning of the year, and plan activities for the remaining months of 2010.

So far, 2010 has been a busy year for ComPart, and the sign of its coming of age are visible throughout the organisation.
The Lobby and Advocacy team uses a wiki as core element in their workflows, as well as videos to produce guidelines and manuals, and delicious to share and organise links. Other departments, like FED and Mission, are also developing a similar strategy. The Conflict Transformation and Democratization workspace has been heavily reorganized, providing users with informative news and documentation of ICCO work in the area. Wikis have been used to write the funding application proposals for two alliances ICCO is involved in, the ICCO Alliance and Connect4Change. We have been supporting users from outside these groups in our weekly surgery session, and supported, facilitated and covered and face to face events, also with social reporting.
A major milestone for the project has been represented by the Enablers workshop held in Soesterberg last May. For the first time, we brought together representatives from 6 of the 8 regional offices, and the network of enablers that are supporting ComPart in the different regions. New friendships, connections and plans have been made during the workshop, with the result that ComPart is now much more known and understood across the whole decentralized organisation. And it is taking off in the Regional Offices, with trainings, introductory sessions and implementation in Delhi, Bali and Kampala. 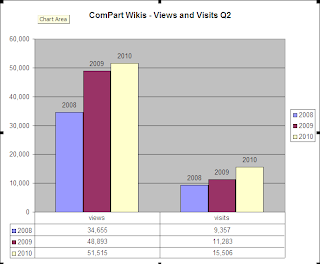 The statistics from the first two quarters of 2010 confirm this positive trends and clearly show how wikis are now at the core of several business processes of the organisation. We have already reached almost the same number of pageviews as for the whole 2008, and we hope to reach the 100,000 by the end of the year.
We are doing less good on blogs and blips, but this might be related to the fact that - shame on us! - we haven't been doing much of this lately. More important, we haven't been able to identify yet other ICCO staff that could champion the use of blogs in the organisation.
Presentations, instead, are still very popular: some 20 new ones have been uploaded onto SlideShare, but because of the fact that most of them are kept private (i.e. only for ICCO staff and not for the wider public), the number of views has declined compared to last year, but it is still strong against 2008.
However, in spite of these numbers, and the growing interest and usage of ComPart, much is still to be done; in the review meeting we will discuss and focus on upcoming activities, improvements and pending issues to finalize and resolve, as well as carry on with some more strategic thinking for the next year, and what the project might look like further down the line when the decentralisation process will be completed.
Posted by Pier Andrea Pirani at 12:25