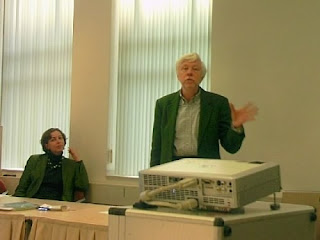 On January 27 ICCO/Kerk in Actie held a lunchmeeting with anthropologist André Droogers who's interests may be best described by the title of this book with essays in honour of him: 'Playful Religion'. Challenges for the Study of Religion'. More info on Droogers accomplishments as a scientist can be found in this Annual Report of 2006 published by the VU, the university Droogers was connected to. To ICCO's development workers Droogers pointed for indepth info to the Hollenweger Center and the research on Glopent a European research network on global pentecostalism.

Sietske Renting and Lisette van der Wel of ICCO/Kerk in Actie invited André Droogers to lecture about the relevance of Global Pentecostalism for the work of development organizations.

In the past 10-20 years a transformation has taken place in Christianity at global scale. Established churches with European roots, like the Roman-Catholic, Anglican and protestant churches are confronted with the departure of a substantial number of their members and see them join new christian churches and movements. In an era that the average church declines the Pentecostal movement seems to keep growing. Actually the poorer levels of populations seem to be attracted often to these faith based communities.

How and where do we meet as development workers this new reality in our work? And what does it mean for the policy of partnerships with faith-based organizations and church partners?

The anthropologist André Droogers, is a wellknown expert of Pentecostalism. In this lunch meeting he shared his knowledge about the background, the meaning and relevance of Pentecostal communities for the work of development cooperation. Droogers presentation led to a discussion about the challenges this development places upon the daily practice of our work.

When asked for a final word Droogers pointed to the enormous diversity in pentecostalism and adviced to try to distinguish the difference between them.
Posted by Gerrit Visser at 08:46