Experiences about a ComPart/Web2.0 training in Luanda, Angola

Yesterday I arrived in Luanda for a ComPart/Web2.0 training for two networks (Education for All – Rede APT-Angola- and Hiv/Aids - Rede Esperança). Right after my arrival I was surprised by some nice changes in comparison to last year. The airport is improved – much easier and faster to get through all the formalities – and some road were remarkably smooth (without holes everywhere). This is the way Angola is preparing itself for the Africa cup which will take place in January 2010. 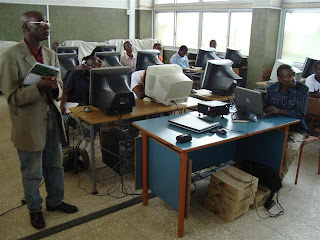 However this fact also seems to have some less positive (side) effects as we experienced this morning during the first day of the training. It appears that the usage of internet has increased so much lately that connection ahs become an (even bigger) problem than it already was. The organizers had arranged for a good venue with more than 15 computers with internet connection; however none of them really could connect because of congestion on the main servers in town. Luckily one of the participants had a USB modem which did work, although loading an average page took between 15 en 25 seconds. This meant the participants were not able to practice by themselves, which meant they had to do something like learning to drive a car without having a car (and sometimes not even knowing how a car looks like and wherefore to use it). So this really was a challenge. However demonstrating some basics seemed to attract the attention and when we came up to uploading pictures an videos the interest clearly grew.

Besides the connectivity issue and the not so very well developed PC-usage skills, it struck me most that the participants were so eager to learn about all these new possibilities and tools. That really is motivating and challenges creativity to try to explain what it is all about and how it works. My expectations for the coming two days are not very high anymore, however I do hope the participants will be challenged to try and play for themselves afterwards at their office or in Internet cafes at moments the connectivity is better.
Posted by Maarten at 22:23