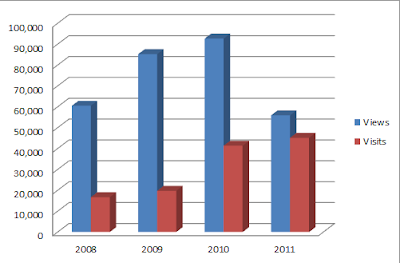 In January 2012, while planning the activities for the first quarter of the year, we also took a look back at 2011 to complete our progress report and see what has been the overall usage of various digital tools over the past year.

The last interim report showed a mixed picture. By the end of the 2011, some trends are confirmed. The total number of pageviews on the ComPart Network on PBworks dropped from 90k in 2010 to 55k in 2011. This clearly reflects the decreased support at the organisational level for this technological solution. However, as also confirmed by the increased number of visits, some ICCO Alliance staff are still very much using different workspaces. In particular, the Studio workspace has proved to be useful and informative space for staff to find information about learning activities and events, as well as tools and procedures. By the same token, several Learning Communities have started using wikis as the home-base and knowledge-base for their activities. Likewise, SharePeople has fully integrated PBworks in their work-processes and they use a workspace for their internal communication and collaboration.

This blog, unfortunately, recorded again a negative trend, in spite of the fact that several new posts had been published throughout the year. Hopefully the new design implemented in December, and more regular and relevant postings, will help in bringing back some users and increase the traffic back to the level of the past years.

Finally, some great news come once again by SlideShare that really proved to be a gold mine in terms of traffic - as well as, from a user point if view, being a great space to find interesting content. In 2011, the presentation uploaded on the ICCO Alliance account received a total on almost 16k views, in line with the traffic recorded in 2010. The following 3 presentations resulted the most viewed in 2011:

Posted by Pier Andrea Pirani at 22:29