Last Wednesday and Thursday (15th and 16th April, 2009) several member of the Dgroups partnership gathered in The Hague, kindly hosted by Wotro. It was quite a special meeting because it was the first meeting of the ‘participant’s council’ of the recently created Dgroups Foundation. About 13 of the 22 Members were present (one participating on-line from Costa Rica during night hours over there...). Of course the main issue which was discussed was about the new platform, its features and wishes for changes and new features. 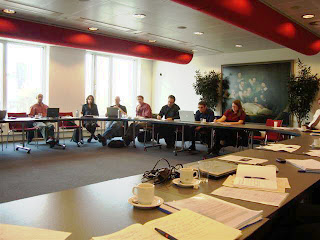 As you might know Dgroups started in 2002 as a joint project of IICD, One World and IDRC/Bellanet. The latter hosted and managed Dgroups and other development organization joined afterwards. In that way the Dgroups partnership started as an informal organization. During a partner meeting in January 2007 it became clear that IDRC would close the Bellanet project and therefore it was seeking for possibilities to transfer the hosting and all administrative responsibilities to other organizations. It was then that the members decided to create an independent foundation. And it was also decided to invest in the technical renewal of the platform.

During 2007 and 2008 the Executive Committee (IICD, Hivos, CTA, IDRC and ICCO) worked on these issues. In this period a temporary solution had to be found because IDRC could not continue to host and administer Dgroups during 2008. This implied a temporary migration of the platform to IGLOO (also a Canada based organization) and the administrative responsibilities where temporarily taken over by ICCO.

In 2008 a tremendous lot of work has been done: designing specifications for the new platform, selection of the provider, cleaning up of all the data, migration to the new platform (now hosted by WA-research in Switzerland), drafting statutes and regulations for the foundation, etc. Fortunately we could count on a very appreciated and necessary coordination of all these activities by Euforic.

During last week's meeting, Dgroups members discussed the reports on these activities, concluding in a discharge of the interim ExCo and Euforic and in the elction of the first board of the Foundation (IICD, Hivos, Sulá Batsú, Helvetas, ICCO). Of course, a fair amount of time was also devoted to discuss plans for the future, especially with regard to the purpose of the Dgroups Foundation: some think it should be a partnership who owns the Dgroups tool and others are in favor of making it a partnership that goes further by promoting collaboration and learning in general (possibly also using/incorporating other tools).

Personally I am very content about the outcome of this meeting. It is clear that at least the members who were present are very involved and keen to get this initiative further. Some important decisions have been taken and I think we have a good basis for working towards the future. However much work has to be done in the first place to improve the actual tool and services for the Dgroups users and in the second place to really consolidate the Dgroups partnership and enable it to play an important role in the development community in the future.

If you have any further questions please send me a mail.

More information on the meeting can be found on the Dgroups blog and the Euforic blog; see some interesting video interviews on Dgroups. The report will be available soon.

Maarten Boers
Posted by Maarten at 13:55