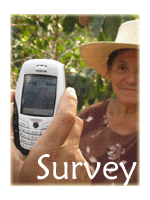 After the MobileActive08 conference in Jo'burg last week it's interesting to reflect on how things are changing in our work because of and around the spread of mobiles. Four or five clusters of applications have emerged during the last five or six years that are making their way into the development mainstream.

Mobile-based survey and data collection tools: There are several mature toolsets that can be used for all kinds of one-off or regular surveys. Episurveyor, for example / or the Nokia supported mobileresearcher. There is a lot of activity in health programmes. IDRC continues to experiment with using PDAs with nurses and midwives. Cell Life in South Africa has a range of applications, including surveying and supporting people living with HIV/Aids. In all these cases the data is sent back from the field using standard mobile signals. An interesting example from the agriculture sector in Mexico has coffee farmers belonging to one collective being trained to use their phones in their self-managed organic quality certification processes.

Bulk SMS for advocacy and information campaigns: there are a number of both Open Source and proprietary SMS bulk products available, for all budgets and contexts, including the new Dutch start-up, texttochange. Two of the most impressive come from commercial marketing companies who are making available products and services that have been tested and tried in advertising campaigns. Ad.iq, for example, is widely used by larger Northern NGOS -such as GreenPeace, Oxfam GB and Action Aid. The Praekelt foundation from South Africa is experimenting with using the advertising space on call-me messages. (Call-me messages are an interesting case in themselves. Research by TelCos active in Africa into the unusually high level of miscalls showed that people were using them to communicate, often via pre-arranged codes - as anyone with a teenager probably knows. The operators introduced a special number that generates a 'Please Call Me' message, onto which advertising messages could be added. Such calls are free to users in South Africa. The same facility is also being used for HIV/Aids messaging, generating a high level of response)

SMS used for more specific purposes such as:

Managing and maintaining communications with stakeholders and colleagues using SMS: this is probably the most ordinary and widespread use of mobiles for communications. Survey data confirms that most subscribers in Africa use pay-as-you go schemes, as opposed to the contract schemes that are most popular in the OECD countries. SMS pings were the constant background to conversations in the conference, in the offices I have visited and the project visit I made to a youth project in a Township. Mobile coverage is now so widespread that SMS is a reliable, as well as cheap, way to maintain the daily round of conversations - professional and personal.

For Democracy and Peace issues this connectivity can be crucial. Reporting f

rom polling stations in Zimbabwe, for example, enabled NGOs to publish stories and some results ahead of Government services. An SMS help line was set up by a consortium of NGOs in Kenya earlier this year following the post-election troubles. The new collaboration platform ushahidi was active in both those situations and, like increasing numbers of sites that aim to connect with users in Africa, is SMS enabled: people can SMS in, or receive SMS feeds.

Finally, the introduction of mobile money to Kenya - mpesa - in 2007 has been transformative, and it was only introduced in 2007. Mobile money is fast spreading to other parts of Africa

For the professionals in NGOs, like ICCO partners, the mobile then becomes one of the standard tools for a multi-channel life - used as a phone or for SMS where there is no connectivity, used on WiFi where that is available, used to transport data or capture images and sounds - to be transferred to a PC. All of this brings us back full circle - how mobile phones can be integrated into information management and the everyday activities that support Learning and Knowledge Sharing. Here is Jan Moolman of sangonet, who will be leading their work on the ComPart programme:

For information on any of these applications please don't hesitate to get in touch.