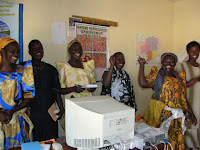 ormation and knowledge sharing among women living in rural East Uganda (Apac). WOUGNET focuses on appropriate technology. They began, for example, with simple tape recorders which they used to those gather questions from the women. After translating the questions WOUGNET gathered responses, re-translated and redistributed the material. They have gone on to integrate the use of Community Radio and some Internet services into their work. They are now experimenting with Mobile Phones, especially SMS, using mass distribution tools - Frontline SMS and BulkSMS.

As well as enabling women to mobilise and campaign, they have experimented using SMS as a part of their Knowledge Sharing and Learning processes. As part of a consultation they sent out five questions by SMS, one at a time. 45 to 50 women became engaged in active discussion. WOUGNET then followed up with a workshop and the women came already engaged in the conversation. This was more successfull than many pre-workshop discussions I have expperienced. Here is Nora Odoi, a WOUGNET Project Officer on their plans:

We know that Knowledge Sharing has a lot to do with increasing interaction between people, enabling 1:1 and 1:many exchanges about issues and ideas. This small exercise opened up a new, unobtrusive channel of communication. Clearly, merely being able to talk or communicate with people using phones makes a massive difference to the richness of exchange, and the accessibility of those who know something to those who want to know more. The figures are staggering. In South Africa, for example, while only around 7% of the population has Internet access, over 80% now have access to phones, slightly more even than Radio. Perhaps simply this opening up of voice and text channels, enabling people to communicate and network on a scale that has never been possible before, will have the greatest impact on Knowledge Sharing.

Pete Cranston
Posted by euforic at 16:21