On the one hand I feel really positive about the two day workshop. The participants brought together an enormous amount of experience and creativity, from across the globe, and people worked very hard ("it was really intense" was one feedback I feel guiltily pleased about, as a facilitator.) As Maarten said, the output is forward looking and imaginative yet also practical and focused.

But, the issue of how to engage and encourage people in organisations to share learning and ideas with each other inside and across organisations South and North is as old as the development business. Olivier Sagne encouraged us to recognise that both horizontal and vertical sharing are important but we know it is the horizontal sharing which is the most difficult. 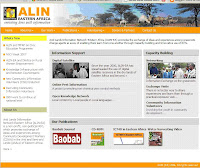 My own experience starts with the Arid Lands Information Network-Eastern Africa (ALIN-EA) which promotes exchange of ideas and experiences among Community Development Workers (CDWs) in the Arid and Semi-arid Lands (ASALs) of Eastern Africa. www.alin.or.ke.

"The origins of Arid Lands Information Network-Eastern Africa (ALIN-EA), formerly Reseau d'Information des Terres Arides - Arid Lands Information Network (RITA-ALIN), date back to 1987 when Oxfam GB held a partners conference in Cotonou, Benin. As a follow-up of workshop resolutions the Arid Lands Unit (ALU) was established within Oxfam GB in the United Kingdom. In 1991, RITA-ALIN programme moved from UK to Senegal as a unit of Oxfam, and was later launched in 1995 as an independent British charity. In 1999, RITA-ALIN closed the offices in Dakar, Senegal, leaving the eastern Africa wing of the network operating as ALIN Eastern Africa with concentration in Kenya, Uganda, Tanzania and Ethiopia."

ALIN stands out because it has evolved its methods with technology. It still produces a paper quarterly, Baobab, but it also uses WorldSpace satellite services to reach remote locations with its information; has CD archives; increasingly uses Video and links with Community Radio. So on the one hand this is a story of a tenacious NGO maintaining its core business through intelligent evolution. On the other, much of the work that they are doing - workshops with grass-roots community development workers, training in communications (writing) with workers and community leaders - is exactly the same as some of the techniques and ideas we were discussing.

Does that matter? Isn't it simply that the old techniques still have their place? But there is still a strong demand for services of intermediaries like ALIN in the same areas they have always worked. So perhaps the most relevant question for ComPart is what will be the impact of the new technologies that we are introducing? The reaction from the participants at the workshop is positive - they see a need and believe the approach and tools will make an impact. Our challenge, I think, is to explore how to improve communications long-term with these approaches.

..as the kids always chant at the back of the car, "are we there yet"?