Who will blip the blip and blog the blog?

We went to ICCO this morning on a very important mission: explain to ICCO staff what the ComPart approach in the South was and how it could help them achieve their objectives communicating with partners more effectively. In other words, we had to be prepared to do a lot of convincing.

The room was nicely arranged; coffee, tea and cookies were available to warm up and be comfortable. Stephanie from Euforic was very smart and brought some stroopwaffel (special Dutch treat) to break up the ice, which worked quite well. But still, I saw our audience a bit skeptical, somehow doubtful perhaps, without knowing what to expect from the session.

We blipped a few attendees to get their first impressions before the presentation actually started. So, we were able to capture some of their expectations or, rather, some of their hesitations about what they were going to see in the morning.

Click To Play
The ComPart support team had worked until quite late the previous evening to have everything prepared for this great moment! Discussions, printing and paper cutting, blipping, blogging were going on, combined with a bit of laughing… It made the time go by quite quickly, but very entertaining. 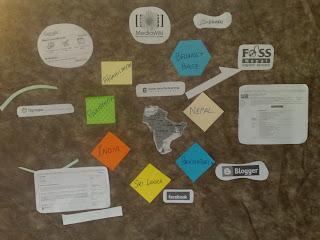 The presentation consisted on explaining the ComPart approach and how it had evolved since it first began its implementation. Real experiences were drawn from the work being conducted by enabling organizations in Southern Africa, Latin American and Southern Asia regions. The stories highlighted good practices and lessons learned from these experiences and gave our audience a flavor of what it was like working with the ComPart approach and how this system could establish a social network of partners across the globe.

As the presentation went on, I could see excitement in their eyes growing when watching clips of a video that documented the activities of a conference that took place in Burkina Faso last year. The use of ComPart tools allowed organizers and participants to express their thoughts and reactions about the discussions that were happening during the event, record and register important analyses and conclusions and show -whoever wasn´t able to attend- a taste of what was going on. They used short videos, blogs with questions and comments that furthered discussions, not to mention the wiki space that was created to help plan and coordinate the event more effectively and facilitate the work of the organizers.

Once the presentation finished, I was curious to see if the perception people had in the morning had changed or had remained the same. For better or for worse, I wanted to know if the ComPart approach in the South had achieved its main goal: convincing ICCO staff that this approach can actually benefit and complement their work and engage them in communicating and collaborating across borders.

What did our audience say?...

Click To Play
So, after these impressions, my next natural question was: did we manage to convince them to blog the blog and blip the blip? What is your take?