The ICCO-Alliance International Working Conference has come to an end last Friday. This conference was a success, many things have been thouroughly discussed and on essential issues agreements have been reached. So the ICCO-Alliance partners have a good basis to (quickly) build on the plans for the future. 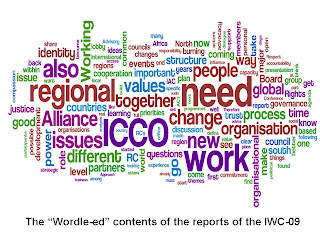 In supporting this conference with over 120 people with sessions running in parallel, attempting to capture information for the group and allow access to a further 200 interested colleagues with passworded access, as "wiki-moderators" we are bound to have learnt a few lessons. Many of the approaches we have used here have been tried and tested elsewhere, but a few are new.

Social reporting
In a passworded context - discussing the business plan 2011-2015 for the ICCO-Alliance obviously is not public - means working in a more restricted space than we have been used to in previous work. Using Twitter in combination with blog posts, Slideshare and Blip.tv proved very powerful as a way of recording discussions at the EADI Information Management Working Group for example. There we could have an initial session to raise awareness of the new tools and then agree on some simple rules to tag all the materials and feature them through one site, while people published throughout the web. Last week we had to define what to share where and whith whom so things got a little bit more complicated.

Walled Web2
Instead in this situation we find ourselves relying on one 'walled garden' (the wiki) to record the internal deliberations, and report on the work in progress. Some products can be released to a broader audience to provide an idea of the process, and give some idea of the content (e.g. the post on this blog). However participation can still be social within this garden, but the barriers to contributing are higher and the motivations quite different. In comparison with some other meetings, this time many more traditional reporting tools were used; with summaries and presentations on flipcharts, and digital written content being rare. The wiki was not really embedded in the process of facilitation, (group reports could and/or should have been directly written and documented on the wiki) also because most delegates did not know how to contribute directly to the wiki. 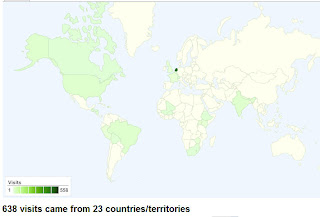 Connectivity and contributions
The venue for the meeting (Kontakt der Kontinenten, Soesterberg) has superb connectivity, but with pressures of time, this is used in the breaks for catching up on emails and other work. As always during this type of meetings there was not much opportunity to review the contents of the wiki. However the documenting work was also meant to be used by those unable to attend (colleagues in the offices in Utrecht and overseas and members of Regional Councils and partners organisations). Of course it can also already be seen to be a future resource for continuing discussions and developing ideas after the meeting.

Multiple channels
What has struck us all about the meeting is the multiple channels being used to communicate the activities during this week. Screens in the common areas ran the 10 minute daily news bulletin which featured activities from that day. Short videos (blips) were used to capture content from the sessions which could be shared with a broader public such as work on the gender policy and regional analysis. These blips were also used to illustrate the process log showing the work of the facilitators and the cartoonist. Presentations were shared on Slideshare and photos through Flickr, this meant they could be available to others.

Multiple approaches
A number of approaches have been used by the facilitators of the meeting. We have changed the way we cover the outcomes of these activities. As the approach to presenting and capturing information is primarily paper based and verbal in the way the process has been organised we have had to rely on photos of flipcharts and audio to quickly capture materials.

Methodologies such as the timeline have been proven to bring identity and understanding to a community, and this way of introducing the discussion on values worked well. By using tools such as the online timeline we were quickly able to showcase the discussions and feature on the wiki and the blog.

PBworks
Again the PBworks platform has proved itself with the speed with which templates for pages can be created, files uploaded (directly transformed in wiki pages) and linked and large volumes of information managed. The spellchecker proved itself as high speed note taking affected the accuracy of data entry. A production line where photos of flipcharts could be uploaded into tables and transcribed later made the wiki a significant reference resource.

What would we change
To start with, we think that working with the wiki needs to be more embedded in the facilitation of the meeting. In developing ideas where virtual discussion will have to continue after the meeting, materials need to be captured as early as possible. Whilst not every group could have worked easily around a screen to report their thoughts, some could have and this would improve capturing the details of the meeting. We need to see when the notes made in word by group members appear on the wiki later.

Further, we needed more preparation in promoting the wiki, improving ease of access for participants, and considering distribution of printouts (this was limited by environmental concerns). It is also important when working like this to integrate communication and facilitation support, something that proved its value as the conference progressed.

Overall feeling
This was a demanding assignment but very worthwhile for the value it brought to some of the participants and management. It proved to be an opportunity to be innovative in some areas. It was an opportunity to see and combine new approaches and to build a communication vehicle for ongoing discussions and a channel for feedback in the conference.

See more from the IWC 2009 and subscribe to the IWC09 newsfeed or email alert.

As an insider outsider (I work with Euforic on the ICCO Compart project, mainly working with the Southern enablers) I found the material made public on the blog, drawn from the variety of sources and using the range of media you describe, gave me a genuine insight into what was happening. Single track or media presentations can't carry the same sense of atmosphere that the diversity provided.

I was at the EADI meeting mentioned; the brief session at the beginning of the meeting on how to use tools people had with them (phones, lap tops etc.) to share ideas and comment on the meeting. In reporting back from small groupwork we tend to summarize and generalize; blogs and tweets give personal perspectives and details.