IWC09: The value of History

Following the 'co-sensing' theme for the day, the working conference focussed on sharing experiences and drawing on these experiences to plan the future. In 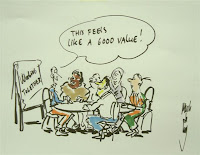 particular to draw on the experience of over 40 years of ICCO Alliance members working for development to identify values for the future.

The first working session saw 120 people reflecting on their joint history of experiences in development. The process looked back to 1965 and forward to 2019. Participants recorded global events, their organisations activities and personal events during that time.


From the Beatles to 9/11 and beyond
It was fascinating to see the how the changes in the global environment and changes in daily life had impacted on the activities of the organisations represented at the meeting. New communication opportunities arose with the development of email and electronic communications in the late 1980's early 1990s. Face to face networking and new alliances were influenced by the fall in cost of international travel. The shift in the power dynamics in the development sector was also reflected in the timeline as civil society organisations developed in the the 1980s and ICCO shifted to a rights based approach in the late 1990s. The different alliances and management approaches evolved during the timeline, and this lead into the summarising of each decade of history to produce a series of shared values that participants wanted to see reflected in future plans for the ICCO Alliance.

The timeline
The events and actions of the organisations are recorded in the timeline below:

Values
The values that informed the work through the decades were assembled and summarised. To provide food for thought four values were highlighted:
Participants were invited to discuss how they understood these values and how they have been reflected into ICCO Alliance work.

Justice
There was some discussion as to whether justice was an aim and working together was a methodology rather than being values.

The argument developed when focussed on the example of working on justice as a value in Palestine between staff there and the Netherlands relied on working together in equality. It was therefore the equality of the relationship which was the value and justice an aim.

There was generally a big discussion over the issue of justice and whether it should take presedence over peace. To get peace agreements you may have to sacrifice justice. A focus on justice can hinder peace agreements where compromise is required.

Compassion
It was raised that compassion for those who suffer from injustice is essential. The question was then posed as to how could the alliance reflect compassion in the new organisation.

Perhaps it is easier when translating values into attitude. When talking about compassion people think of old fashioned notions of charity but really it is a question of listening and respect. This issue will be elaborated in the session of Wednesday.

Perhaps compassion can be most clearly demonstrated through developing strategies where the poorest of poor are reached. A recent University of Amsterdam study shows that development assistance has reached middle range of poverty but not the very poor. This could be a demonstration of seeking justice and demonstrating compassion. One test should be that we want this for ourselves, e.g. a public health system, a venue where you would go for medical assistance, don't make it "just enough" for the beneficiaries.

Working together
It is easier to do things for than with people. This is why it is so important to show respect for differences when working with others. The discussions around the importance of working together came back to issues of respect, equality and justice.

Respect for differences
When the North feel they are too tough they withdraw and call it respect.
The question of accountability is funding. The voices of the critics have been taken on board and we have a new way of working. Co-responsibility may be the answer, but this is not enough. There is a responsibility for stewardship, to preserve the environment together. If we take charcoal energy resources at the speed we do now it destroys livelihoods in South and North. There is a common duty to stop this.

Values are not something separate from the work, it is essential to measure everything we do by these values. Two different levels of values Individual and Organisations.

The discussion suggested remembering some non negotiable standards, for example transparency and equality. Other values that were raised comprise: courage, hope and inspiration.

As the ICCO Alliance is moving into a larger group values should not all be open to negotiation. For example, being brave, the need to be courageous, the need to be open, do not compromise.

This discussion gave a bigger and broader understanding of the values to take forward tomorrow in the group working on the topic of values for the ICCO alliance.

Subscribe to the IWC09 newsfeed or email alert.
Posted by euforic at 11:18