The paragraph above quoted from a song describes the mood and the actual situation while I was preparing for the ComPart workshop. It also resonates with my general attitude in life. Being a Christian, I live on faith and trust in a Heavenly Father who is in control of my life. So I said to myself, given the difficulty in coming to the workshop, perhaps He has other plans for me. However, I believed that God willing, I will be able to attend.

The journey actually started with a forwarded email from a colleague (he is actually my boss but given the highly democratic culture at ICCO, we call each other colleagues) in the ICCO Regional Office Southeast Asia & Pacific while I was touring the countryside in the Philippines. I was with my Dutch counterpart visiting partners to formally introduce me as the new Program Officer. The email was from Machteld Ooijens inviting the RO managers to nominate a staff to attend the ComPart Enablers Workshop. The regional office is quite new so we haven’t gotten to the point of discussing “other tasks that may be assigned”. Why the email landed in my InBox (there are actually 10 people equally qualified to attend) is another story. And so it came to pass that I have to prepare for a trip to Holland while I was working on the project transfer and relocating my family to Bali. It doesn’t matter, I wanted to attend! A workshop on an internet-based knowledge-sharing platform using the popular internet tools otherwise used for gossip and exhibitionism and voyeurism seems fun!

The journey, however, was long and full of challenges. One of Murphy’s Laws which says “If anything can go wrong, it will!” was very much evident in this trip!

The first leg is Manila to Bali. This trip however did not happen as scheduled. We were supposed to fly March 31 but our actual flight happened on April 14. The first challenge was the Indonesian visa. It took sometime before me and my family got a visa from Indonesian immigration. The staff working on the visa is not allowed to pay the usual facilitation fees hence she has to go through the slow, patience-draining process! The second challenge was the Dutch visa. The main document needed was the formal invite from ComPart. It was written March 23 but somehow got lost in transit so I received it April 10. It takes the Dutch embassy in Manila 10 days to schedule a visa interview and another two weeks to process the application so working on the visa in Manila was out of the question. We leave in four days for Bali!

And so I flew to Bali with my family. The airline companies have perfected the science of squeezing the most Euro from their passengers. They are following a Calculus theorem which says that “the shortest distance between two points is a curve.” So the flight went from Manila to Singapore and Jakarta before finally going to Denpasar (see the map). We can actually derive the equation of the curve using methods in Calculus. Why do I keep remembering lessons in Calculus that were given ages ago? Maybe the ComPart discussions triggered or reconnected some broken neural connections in my brain!

Anyway, it took us about 15 hours to complete the trip. We even had to cross a time zone even if Manila and Bali is in the same time zone. However, travelling for me is always fun – a chance to meet people and see interesting things. I focus on the trip and not on the destination and this trip is a bonding opportunity for the family. 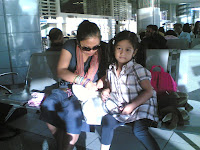 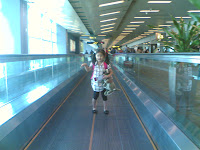 Upon arriving in Bali, the first order of the day is to resettle the family and catch up with work at the office. A couple of days passed before I had a chance to go to the Dutch consulate and apply for a visa. In a very nice way, the visa officer told me that it would take them a month to process the visa. But I only have three weeks before the workshop! Then you have to go to the Dutch embassy in Jakarta! They can do it in two weeks! So I sent all documents to a representative in Jakarta. It is a business related trip so the office can work on the visa. Or so I thought! I am working with a Dutch NGO funded by the Dutch government so the visa officer needs to see me in person! Life is good, another reason to travel. And so I got the chance to soak in the culture, taste the food and breathe the fumes of Jakarta.

The visa officer asked me three questions: when is my trip, what is the purpose of my visit to Holland and why am I applying very late! These are questions of national security! Then she said she needs to consult her boss. Maybe my responses to the questions were sensitive in nature! A Dutch guy took a peek, sized me up and maybe thought “ICCO is indeed downsizing, from 6’4” to 5’4”. I am no threat!

Anyway, the visa officer finally told me that they will give me only a BeNeLux visa and it would take three days to process. I’ve had enough of Jakarta in one day so I gave an authorization for somebody to 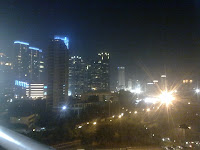 claim my passport and courier it to me in Bali. The interview was scheduled on a Friday, so the work on the visa only started the Monday of the following week. The release date was a Wednesday but my representative had medical emergency so he failed to go to the embassy. Thursday happened to be a holiday (Ascension Day – the day when Christ, after his resurrection, finally ascended to heaven) so Friday is the last chance to get my passport in time for my May 16, Sunday flight! I left the office that day still uncertain if I’ll be able to go!

Meanwhile colleagues in the Global office who were arranging for the plane tickets were also facing their own challenges. Because of the uncertainty of the visa, they did not buy the tickets yet and seats for the flights were fast disappearing. I finally got my passport evening of Saturday, May 15 and a ticket departing in the evening of Monday, May 17. The delays were actually a blessing in disguise because had I left on the original date of departure, I might have been stuck of a day in another airport since Schiphol was closed on the date of my arrival due to the ash clouds from the volcanic eruption in Iceland.

And so finally, I’m here is Soesterberg!

It was a tiring journey but being met by Maxime at the airport and being welcomed at the workshop venue by a roomful of smiling and friendly faces of beautiful/handsome and seemingly interesting people somehow gave me a boost of energy. I am optimistic, that the trip would be worth it!
And now the headache starts. It takes my body a couple of days to notice that it has crossed several time zones… but this is another blog story!

A Dutch guy took a peek, sized me up and maybe thought “ICCO is indeed downsizing, from 6’4” to 5’4”. I am no threat!
This is the best joke yet about our decentralisation efforts! Thanks for your report.
Rob Witte