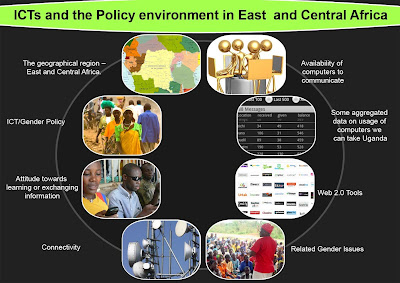 Each region was to talk about their context so that others would understand the conditions we are or will be working in especially elements that favor or complicate the use of compart or ICT.

Our presentation was summarised in a poster (see image on the right) and the following outline:
The Geographical Region of Central and Eastern Africa: The Region covers 8 countries of Burundi, DR Congo, Ethiopia, Kenya, Rwanda, Sudan, Tanzania and Uganda with the RO in Kampala and 2 suboffices in Juba and Congo. According to the concept of trilocation, these 3 offices together form one regional organization even though they are geographically separated.
ICT/Gender Policy:
In E.A, all the 3 countries have a draft ICT policies, ministry if ICTs, ICT Parliamentary committees. 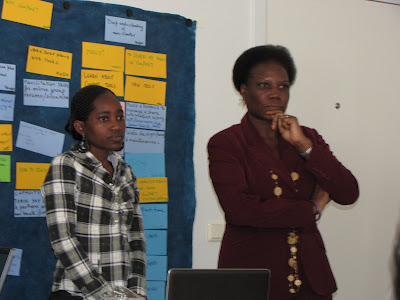 Attitude towards learning or exchanging information:
Poor culture in information exchange exists and the use of compart should play an important role in solving this problem.

Connectivity:
The existing state of telecommunication in the country leaves much to be desired as a gate way to internet. On the whole, internet diffusion is severely constrained by low levels of telephone penetration, the high cost of telecommunication connection, lack of telephone service to homes and businesses , frequent and long power interruptions among others. On average cost of internet connectivity in Uganda ranges between USD 100-1600 and monthly subscription can go as high as USD 2400 a month depending on the bandwidth and service provider.

Availability and usage of internet: Internet statistics
The Regional Office has 48 staff out of whom 36 accesss and use computers/internet, the other 12 staff who don't have computers don't actually need it for their work and atleast all the staff have the basic knowledge on how to use internet. This is different for our partners in the remote areas who are affected by a number of factors ranging from high costs, slow and unreliable connections, lack of power and frequent power interruptions among others. The penetration rate of internet in Uganda per say is very low for example in the year 2000, there were only 40,000 users out of a population of 24.4m people and by the year 2009, only 2.5m users were registered visa vis a population of 32.3 million acording to the International Telecommunications Union publications 2010.

Government is also in the process of rolling out 1 computer per child in UPE schools with an American company. This has advantages because it favors those who can't afford including women.

By Jennifer Kironde
Posted by compartuser at 13:41